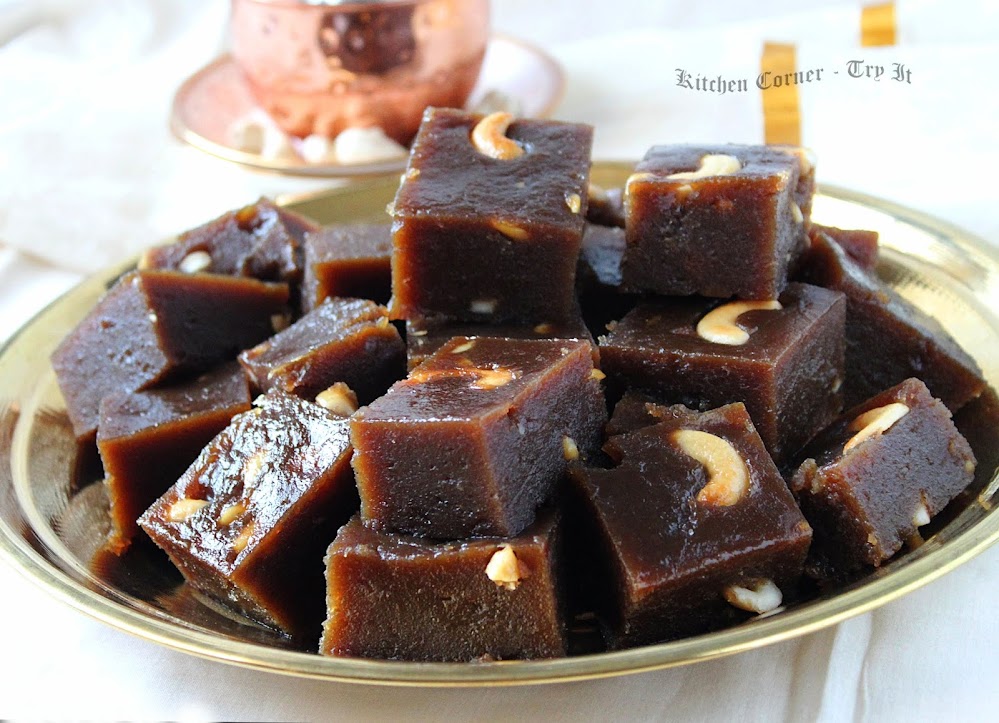 Kerala Black Halwa/ Karutha Halwa/ Rice Flour Halwa
December has finally arrived and it means it is almost Christmas time! How many of you look forward to the Season of Joy! My birthday also comes in December, so it is a double celebration for me 🙂 How is the Christmas planning coming along for everyone? It is exactly three weeks for Christmas and I am planning to share a few recipes for the holidays this year. This is the first one I wanted to share with all of you -Kerala style sweet delicacy- a real nostalgia, the Black Halwa.
Halwas has always amazed me with its simplicity, unique texture and taste. It is a gel-like sweet candy that you can never stop eating. When making halwa there is a time-honored cooking technique and halwa making is time-consuming. So people simply prefer to buy it from the shop. But making your own is a rewarding experience. Now many of the traditional sweets are forgotten or get overlooked for fancier ones in bakeries. But that is not the case with halwa. The love for this sweet has not diminished one single bit. It has stood the test of times and is stilled loved by both young and old. Halwas of multiple hues still adores the glass shelves of bakeries and sweet shops. Have you ever visited Kozhikode in Kerala? It is the halwa capital of Kerala. Mittayi theruvu in Kozhikode a street dedicated to halwas. It is so mesmerizing with lines of shops displaying halwas of multiple hues, flavors, and texture.
The Kerala style black halwa tastes divine and is a die for! Black halwa is a regional favorite-a rustic confectionery that has a special taste that lingers in your memories. It is made with local ingredients, easily available like rice, coconut, and jaggery. Rice is a staple and coconut is quintessential in Kerala cuisine. So this recipe shows the uncanny ability to turn locally available ingredients into unique one- of- a kind delicacy. Coconut oil, coconut milk, cardamom, and ghee enhances the flavor and taste. The sweetener used is jaggery or unfiltered sugar from coconut sap. It has a rich molasses taste. This halwa is called karutha halwa meaning black halwa and it is due to the color of jaggery. It is best to use dark color jaggery or natural jaggery for dark color and richer flavor. 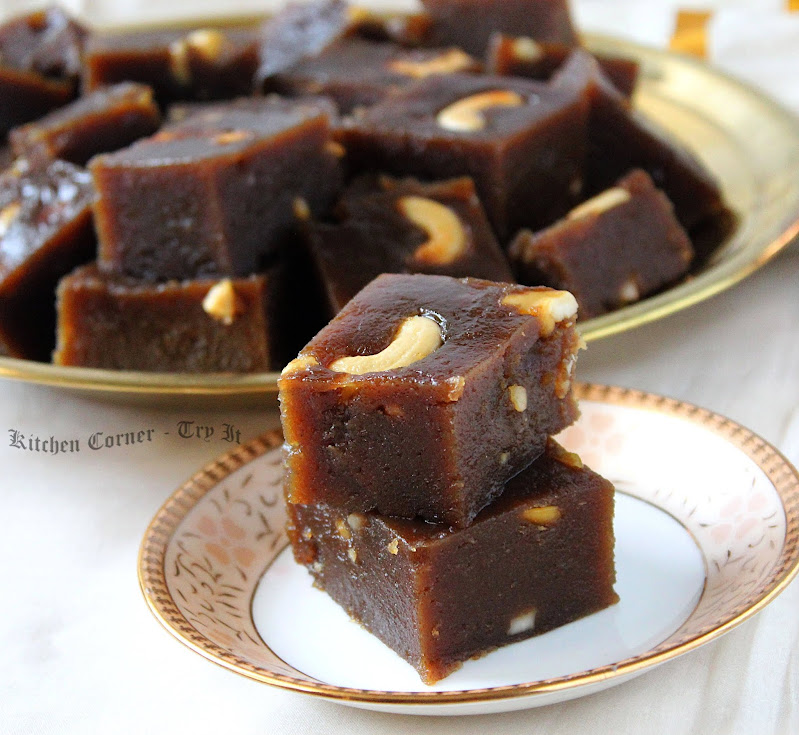 What is Halwa?
Halwa or halvah is sweet confectionery popular in Asia especially the West, Central, and South Asian regions. It has a long tradition and is ingrained in the culture and culinary tradition of the region from around the middle ages. Now I told you it is an old recipe and the first literary reference of halwa is from the thirteenth century. The word halwa is Arabic. But each region has developed its unique recipe for halwa. The Greek halwa is made with semolina and honey, Turkish halwa with tahini or ground sesame seeds and the Indian variety is made with semolina or flour. Other regional favorites are made with wheat flour, rice flour, nuts, lentils, fruits and also certain vegetables like carrots, yam or squash.
Is the Black Halwa unique to Kerala?
Black Halwa is a unique Kerala delicacy and is a regional favorite. It is made with ingredients available in the coastal region of South India like coconut milk, rice, and jaggery. Halwa with rice flour has a different texture which is soft and not chewy like flour halwa. The use of coconut oil, cashew nuts, ground cardamom, and dry ginger powder gives it is a unique taste. But there are recipes similar to karutha halwa. Dodol popular in Goa, Mangalore, and Srilanka is also made with rice flour and jaggery and looks similar. Now it is not surprising as these regions share similar culinary traditions with Kerala. Dodol is usually made for the Christmas feast in Goa. 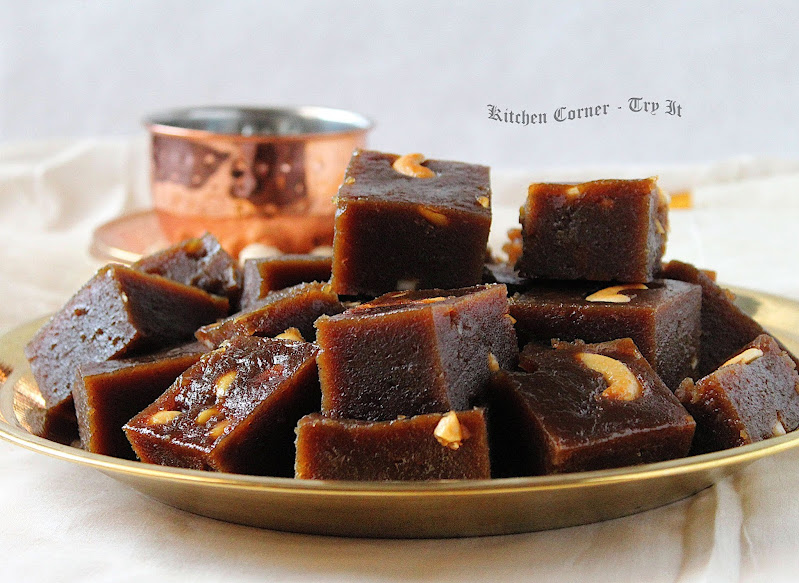 Steps of making Black Halwa.
The most important ingredient which gives the rich dark color is jaggery or unrefined coconut sugar. The darkness depends on the color of the jaggery. It is best to use dark color jaggery or natural jaggery for dark color and rich molasses taste. In some regions of Kerala karipatty or palm sugar is also used. You can soak the rice and grind into a paste for this recipe. But I have found that using rice flour yields better result especially when it comes to texture.
The mixture of rice flour, coconut milk and jaggery has to be simmered and stirred continuously to avoid lumps and to prevent it from burning. It is best to cook on a medium flame for an hour.
Cook, until it reduced to 1/3 of its volume and the coconut oil, begins to separate and float on the surface. You can strain off this excess oil before transferring it to a tray.
When it reaches a gel-like consistency, immediately transfer into a greased tray or plate. Allow it to cool down completely, slice and serve.
Black halwa tastes best the next day. It has a shorter shelf like when compared to other halwas. Refrigerate it for up to two weeks. It freezes like a charm. So if you make a larger batch, just freeze it. It thaws quickly and tastes just the same. 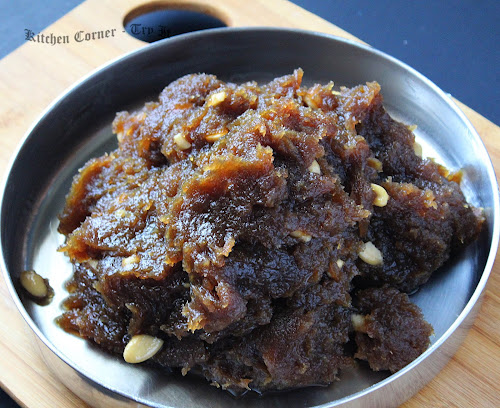 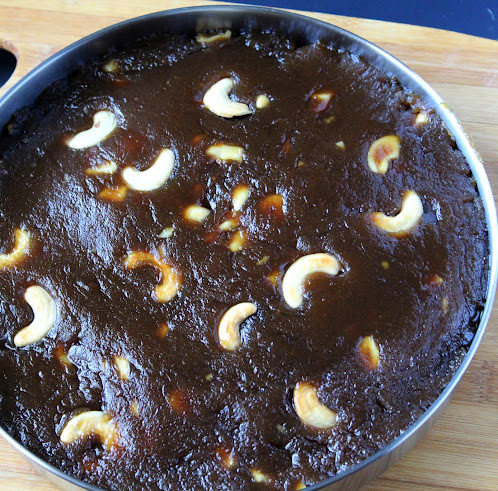 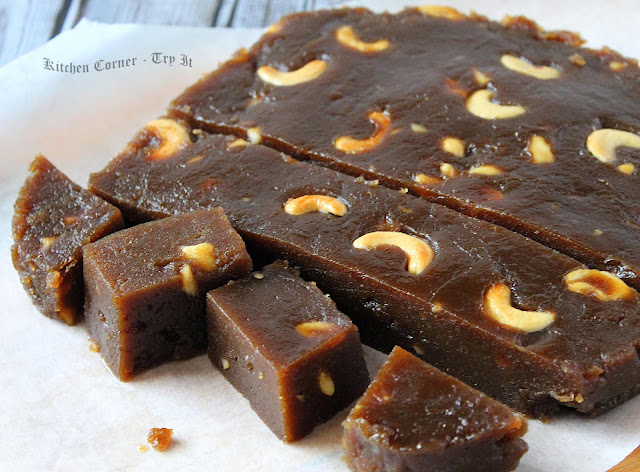 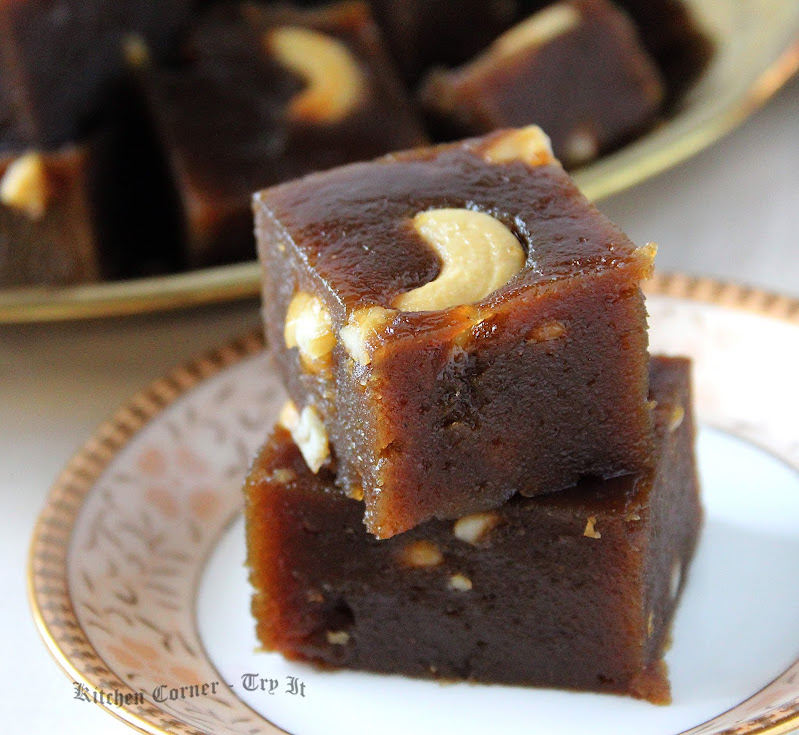 The first step is coconut milk. Use freshly grated coconut. To extract coconut milk grind in a mixer for one minute. Strain and squeeze as much of coconut milk as possible. Add some more water and pulse in mixer one more time and strain again. Measure to see if you get about 6 to seven cup.

To make homemade rice flour wash and soak 1 1/3 cups of raw rice for two to three hours and strain into a colander. After five minutes spread the rice on a piece of cloth and leave it to dry for 10 minutes. Do not allow it to be completely dry. There should be a little moister left in the rice. Using a mixer make a fine powder. Sieve the flour to make sure there are no lumps and use get a real fine powder. Grind the large chunks again and sieve once again. You can also make a paste of this soaked rice and strain to avoid large chunks.

Bring one cup of water to a boil. Add powdered jaggery and allow it to dissolve. Strain the impurities and set aside.

In a heavy bottom pan or uruli add the coconut milk and jaggery. Add the rice flour and mix it thoroughly. Use a whisk to blend everything properly. Place on the stove and stir. As the mixture warms up, it will start thickening. It is important to stir continuously to avoid lump. Cook for 8-10 minutes or till the mixture turns to a soft dough consistency. At this stage start adding the ghee and coconut oil little by little to prevent it from sticking.
Add sugar and continue stirring. Sugar will caramelize and enhance the color.
Add cardamom powder, dry ginger powder and half of the chopped cashew nuts.
Cook, until it reduced to 1/3 of its volume and the coconut oil, begins to separate and float on the surface. The halwa will be ready when it leaves the edges of the pan and can be rolled into a ball with the spatula. You can strain off this excess oil before transferring it to a tray.
Take a greased steel plate or tray and spread this mixture evenly (use the backside of a spoon to spread and make it smooth). Garnish with more nuts. Allow this to set for three to four hours and then cut into desired shapes. 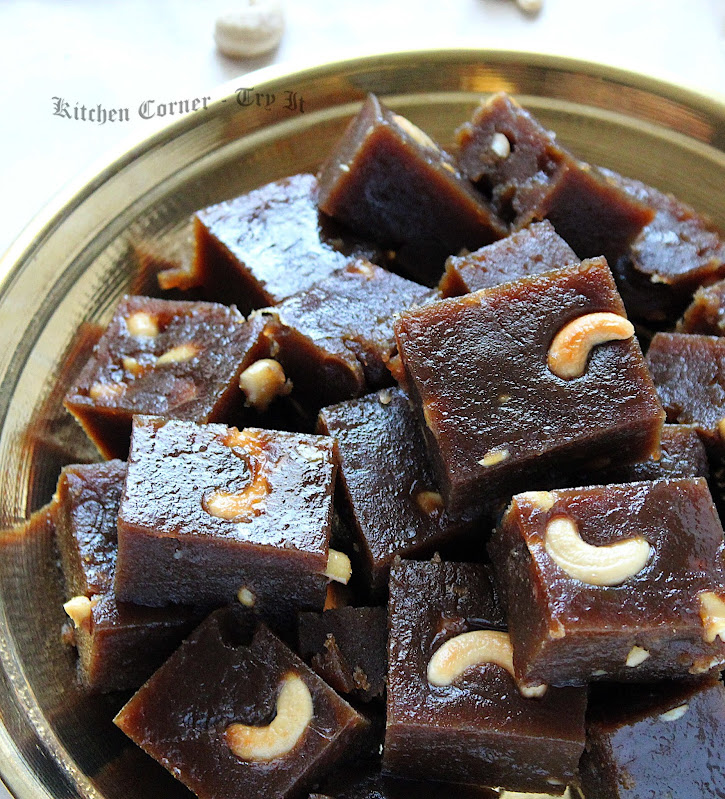 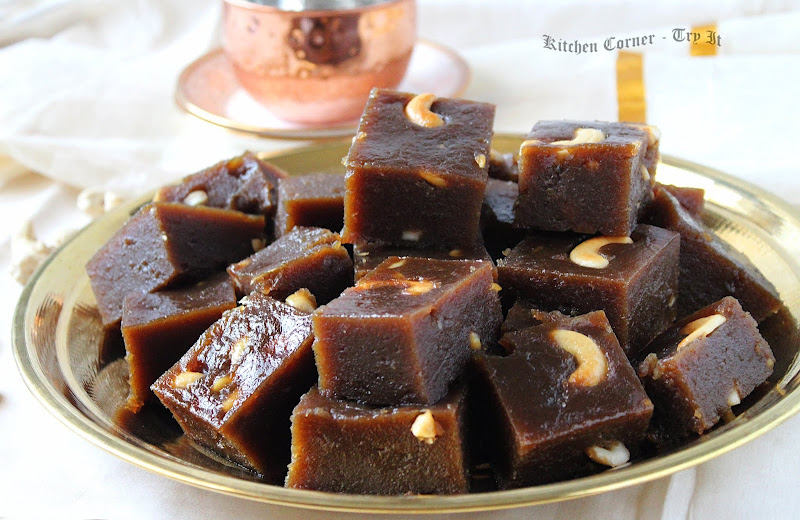 Try it,
Hope you will all enjoy!